Good Morning Everyone and a Happy New Year to you all!! It’s 2022 and a brand new year, so let’s try and make the best of it and start out fresh.

The two books I want to talk about today are ones that can be read anytime and anywhere. Both are exciting, full of danger and intrigue by Robert Ludlum. A man who certainly writes very comfortably in the field of espionage. 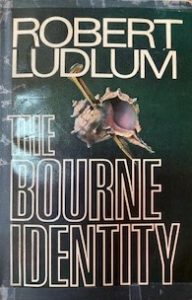 Imagine being found by a French fishing boat in the open sea more dead than alive and having no memory of who you are or how dangerous you are. Such is the problem with the main character in this story. The boat returns to port with him and he is placed in the care of a doctor who had seen better days. On examination, the doctor finds that his patient has had facial plastic surgery and there is some microfilm in the man’s hip which just adds to the mystery of his identity. Over the coming weeks and months certain abilities and skills of the nameless man become known.  He is multilingual, apparently fluent in the languages he speaks, he is well versed in martial arts and has a comfortable  ability with firearms… but he does not know who he is.  This is how The Bourne Identity begins and it is a page turner. Not only is our main character trying to find out who he is but also why people are trying to kill him. I thought Ludlum did a fine job with this work making the reader more and more interested on who this character is with small clues to his past in the pages. There have been two film adaptations, one with Richard Chamberlain and the more recent one with Matt Damon. I thought the one with Chamberlain was alright but as I haven’t seen the film with Damon, I can’t really comment on it. If anyone would like to comment, please do. 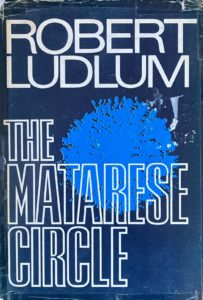 Our second book is called The Matarese Circle. I really liked this one. It begins with the assassination of a high ranking U.S. Army General on Christmas Eve and concerns a type of “Power Elite” story, a secret group controlling and influencing governments and finance around the world. The two heroes in this story are two men who hate each other but because of circumstances must work together. A lot of mystery and action in this story as these two men try to unravel what the Matarese circle is and who is involved.  A great read for the weekend.

Well, that’s all for this week. If you have any comments or wish to share a book, please feel free. I’d love to hear from you!